One of my customers asked me to do a video outlining how to run the Gas Stations and what to expect.  Below is a video showing proper fuel sizing for the chip grate, fuel prep, and what to expect when doing a raw wood start.

Yesterday was another good time at the Maine Forest and Logging Museum. They served some of the best traditional Maine beans I have ever had.

Little Victoria was feeling muscular so she tried to feed their Lombard log hauler. 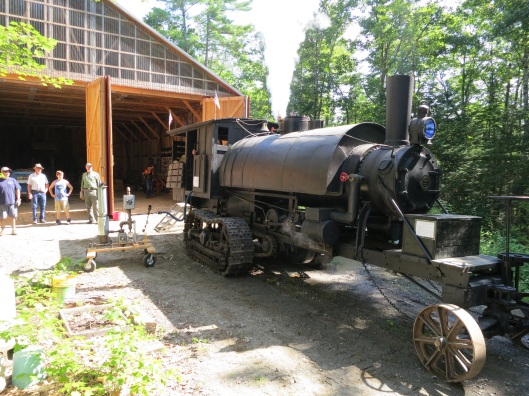 Sadly, The Lombard uses one cord of wood for every seven miles so her 5 lbs of chips didn’t get this beast very far.

If you are ever in the Bradley, ME area I would encourage you to stop by the museum.  I am going back a second time just see everything I missed after the show died down.

Many people have asked me, “How do I start my gasifier if the grid goes down?”.  My simple answer is to use a car battery and charge it with the generator.  Here is my proof that it works:

That is about as smooth as it gets!   The car battery can be charged by the internal alternator in the GX200 clone.

Most of you know that I recently threw my back out badly.  Partly it was due to a poor set up at the Square Tail demo and the resulting excessive pulling on the starter rope.  Here is what I should have done to avoid the problem:

Priming the fuel delivery hose is especially critical for small engines.  Using the new configuration at the Seal Cove demo I started the machine about a dozen times and never ran out of starting battery power or had to use the pull cord.

Yesterday was absolutely amazing!  I had a great time meeting everyone at the museum and checking out the Brass Era vehicle collection.

If you couldn’t make it don’t worry.  We are already planning the next event.  It will be a demonstration day for alternatively fueled vehicles.  I am going to get busy and convert my 1989 Jeep Wrangler to run on wood so I can give rides around the property.  I will announce the date when the plans become definite.

The stars have aligned and the automixer is FINALLY running an engine.  For the first time EVER I got to stand back, grin ear to ear, and listen to an engine run through an entire fuel load with no poking or prodding.  Life is going to get boring now.
.
.
Maybe I will take up needle point while the Gas Station runs.
.
In all seriousness I need to get the adjustment amplitude down but otherwise the core code is good to go. Then I can go on to load testing and get some REAL data.
.
Stephen

I was just out running the Gas Station Lite and her 4kW.  I have been thinking about how open the air mixer was in my video and it dawned on me that I might be able to go with smaller nozzles, increase the blast rate, and get more power.  I reduced the nozzles from .25 to .188.  That may not sound like much but it almost doubled the blast rate and drastically improved the performance.  It was easily holding 500W and held 1500W for almost a minute before the fuel/air ratio went off and everything tanked.  Not bad considering that the timing has not been advanced.

The only down side was that there was more sooting, but I would expect that with a high blast rate.  Strangely enough she ran with the mixer in just about the same position.  I suspect there was more reduction and water gas shift resulting in more gas volume.

We have had a few days of rain so I got in some time on my CAD system.  Here is the result: 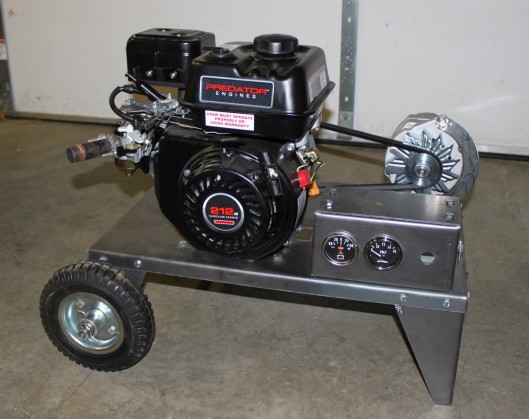 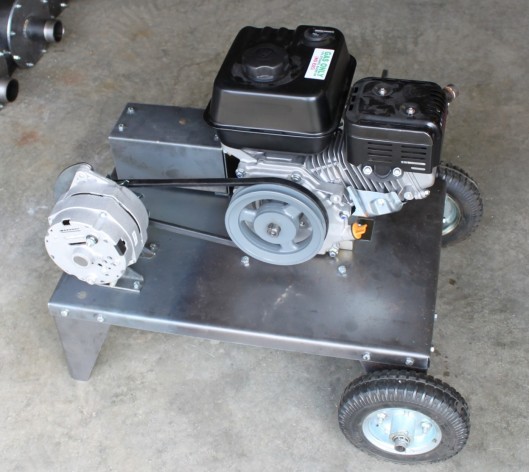 I know small engine powered alternators have been done to death on the web but I am sorta proud of this little thing.  It has a 105 amp GM single wire alternator, the alternator is spring loaded so the belt should never need adjustment, and there are cut outs for oil changes so it doesn’t go all over the deck.  The little panel on the front has a voltmeter, ammeter, and a 180 amp load shut off switch which is on the way.  I’m not sure if the gauges will be shaken to death but that is what testing is for.

This unit is going to be my backup for demo season.

I suspect this 1200-1800rpm unit is going to have much better output compared to my 3600rpm generator.  It’s just hard to get the gas completely burned when turning half the speed of light.(not really but you get the idea)

One thing I learned when researching other designs is that a lot of the “single plate mounts” have the alternator turning backward.  This results in the air trying to be scooped in toward the rotor while centrifugal force is trying to sling the air outward.  The resulting fight lowers the air flow and can cook the alternator.  This design doesn’t have that problem at the cost of increased size.

As always, if anyone wants one drop me an email and I will work up a price.  Back to the automixer……..

I had the Gas Station Lite out today running her new 4kW generator.  I wanted to get in some practice before demo season.  Everything ran great.   You can see it here:

The gas going to the mixer was only about 90F with the engine running under a 500W load.  I still need to get the power up, however.  The engine bogged down way too easily at high speed.

I suspect this engine will have to stay intact for demos and the new wood gas battery charger will get a timing advance right from the start.

Generally a wood gas cyclone filter is used in the vertical position.  I had someone ask me if it would work horizontally so I gave it a try.  Surprisingly the results weren’t too bad.  I got 85% dust recovery in the test.  You can watch it here: