Today I tried an experiment that I have been wanting to do for a long time….make cattail or typha ethanol.  I have read multiple sources that praise the high yield per acre so I thought I would give it a whirl.  First, we need to know what we are dealing with so I went up to my catfish pond and got a bucket of cattail plants just after the ice had melted.

The first thing to notice is the extensive root system.  Anyone who thinks they are going to pull one of these up by the stalk is mistaken.  Next, I wanted to be sure I was in the right part of the plant looking for feedstock so I did an iodine starch test:

Yup!  There is starch in them thar roots!  The normally brown iodine turns black when it contacts starches.

Then things got harder.  I had to get the starches into solution so I tried to shred them in the blender.  That was like trying to shred a ball of kite string as you will see later.  Next I boiled the mixture to kill any stray micro-organisms that might ruin the mash.

Doesn’t that look delicious!?!  You can see that it became somewhat viscous, however, as the starches were released.  Next came filtration:

As I said, the blender didn’t do a very good job shredding the rhizomes.  And here is the result: 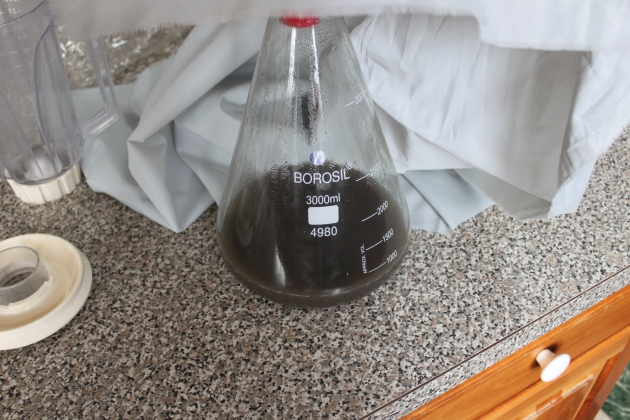 Even going through the fine nylon cloth filter shown, there was still mud I couldn’t filter out.  At least it was almost sterile.  Next I added 1 teaspoon of commercial amylase when the 1200ml of mixture had cooled to 67C to convert the starches to fermentable sugars.  One third of an envelope of Safbrew S-33 yeast was added at 35C.  Here is the current product: 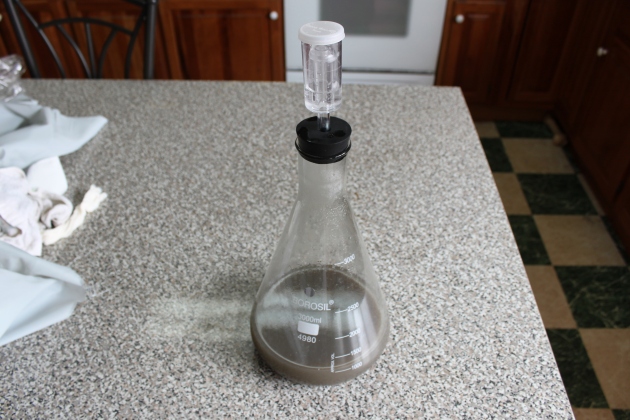 The mixture did not have any sugar added so any alcohol produced will be strictly from the root starches.  After an hour the water lock began to bubble as expected so the process seems to be working.  My office is starting to smell like a moonshiner with a broccoli fetish!!

After eighteen hours of fermentation the mash smells faintly like alcohol and the refractometer says I have a 1.5-2% ethanol solution.  This feels about right considering the low weight of feedstock I added, the fact that the roots were thin first year stock with a lot of “skin”, and how thick I had to make the corn ethanol mash to get just a 5% solution.  At this point I am going to end the experiment and redo it with a measured weight of feedstock so I can get some valid numbers that I can ratio.  At least I know the process works.

and chopped them to avoid the stringiness problem:

Then I blended and boiled them with 400ml of water to get the starches into solution and sterilized:

and at 35C I added one third of a package of Safbrew S-33 yeast.

This time I fermented the solid root particles with the starches and liquid in an attempt to recover any starches that might not be easily water soluble.  There was some tendency for caking and having the solids rise up out of the liquid: 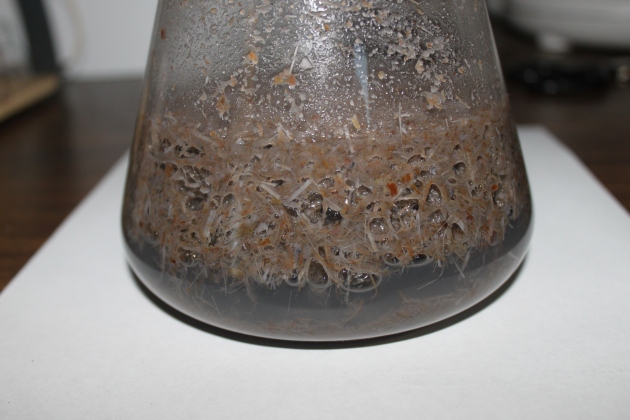 so an agitator would be helpful in any large scale operation.

At 18 hours the refractometer indicated a solid 2% alcohol solution and the alcohol smell was much stronger than before.  This is still lower than I would like because the energy required to distill such a low alcohol concentratration is significant.  When distilling a 5% corn mash I could only get a 25% initial concentration from my pot still.  2% would be even tougher and require even more distillation runs to get to a flammable concentration, burning large amounts of boiler fuel.  This probably wouldn’t be a big deal for a commercial reverse osmosis plant but for a small scale distiller it’s an issue.

The big question in my mind at this point is the quantity of water in the roots and the amount of actual dry starch that I fermented.  In the corn process the corn was a very dry, hard, and dense.  The cat tail roots were wet, soft, and spongy.  I could believe that they were +70% water.  If I did only add 40g of starch to 400ml of water then I am doing significantly worse than corn with my small scale apparatus and young roots.  440g of corn in 4200ml of water yielded a 5% solution which is roughly the same ratio of feedstock to water as the cat tails which only gave 2%.   Hmmm….

I just baked a sample of my root stock in a 190F oven for four hours to determine the moisture content.  The sample started at 112g and ended at a crispy 20g.  That means my sample was 82.14% water and 17.86% solids.  Not all those solids were usable starches.  My 2% mash is starting to be a lot more understandable.  In my latest fermentation I only added (138g*.1786)=24.6g of total solids.  If half of that was fermentable as the literature says then there was only about 12.3g of convertible starch in the mash.  Getting 8-10ml of ethanol from 12.3g of starch sounds like numbers I can believe.  I need to fatten those roots up!