From previous experiments I know that chunky chips will dry in still barn air in five days if they are spread on a table and stirred every day.  What if I put them in a moving air stream to dry them faster?  That is the point of this page.  To answer the question I created a drying bin consisting of a 50cfm fan mounted to the bottom of a five gallon bucket.  Inside the bucket I placed a distributor plate to spread the fan air and minimize the chances that it would go straight up and not dry the edges of the fuel stack.  Here is what I built:

After building my drying bin I cut down four birch saplings from a swampy area behind my house.  The trunks were approximately 1.5 inches in diameter and they were roughly ten feet tall.  I delimbed them to minimize fine chips and chipped them with my modified wood chipper.  Each tree took about 2 seconds to chip.  After chipping them I screened the chips to remove the fines with 1/2″ screen.  Here is the result:

My gasifier is getting hungry already.  I turned on the fan and weighed the bin and contents throughout the day.  Here are the results: 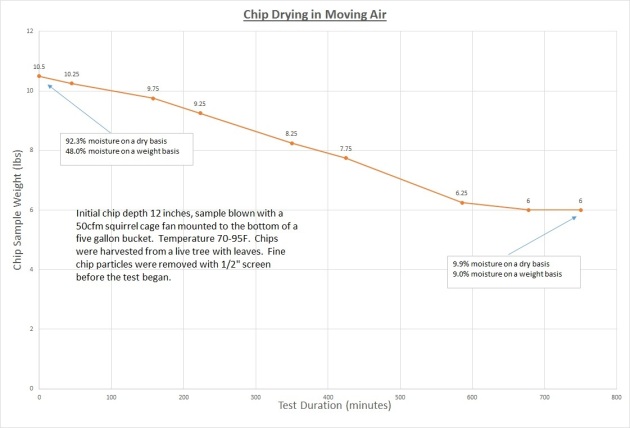 After eleven hours the bucket and contents stopped losing weight and remained constant so that is probably as dry as I can get them.  The temperature in the barn ranged from 70-95F during the experiment and the weather outside was dry, full sun, and 75F.

This morning I tried to dry the fuel more but the weight still remained the same.  Since this is obviously as dry as it is going to get let’s see how well we have done.  For the second part of this experiment I took a 134g sample from the center of the bucket and dried it in a 240F oven until the weight remained stable.  After two hours the weight stopped dropping and held steady at 122g.  I am defining this as my “dead dry” weight.  That means that 12g of water was evaporated in the oven.  Going into this morning’s experiment the wood was therefore 12g/122g = 9.8% moisture on a dry basis.  This is very close to the results I got when I dried my chips in still barn air for five days(8.9%) and fine for gasifier fuel.